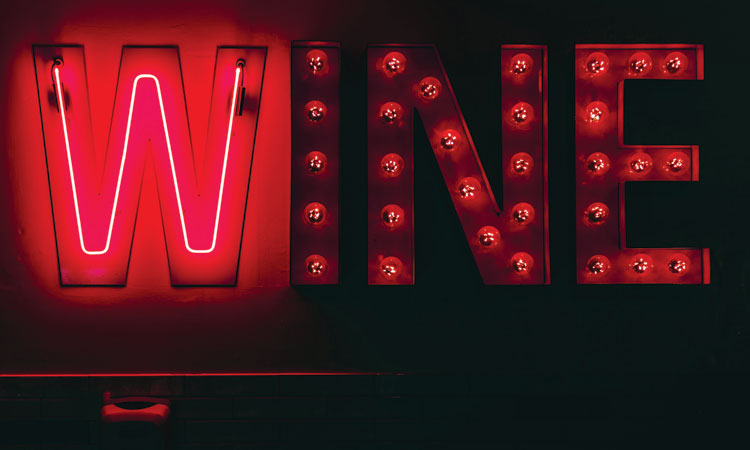 Photo by Road Trip with Raj

I’m on a small stage in a swanky art gallery fashioned from an orphaned Wells Fargo branch—there’s a weird and wonderful installation in the vault, snacks are being served from the teller’s counter, paintings and sculptures spring up like a flush of tasty wild mushrooms from the decaying remains of Finance and all of this spells a metaphor we definitely need more of. A live jazz band pauses its set of bossa and old-school swing.

I’m pairing a flight of local wines with a flight of local poets, hoping to illustrate five characteristics common to both crafts: words like tension and structure and typicity. While each poet reads, the audience tastes a sequence of small-batch wines—a sauvignon blanc whose fresh grassiness strikes a surprising accord with certain nostalgic childhood reminiscences; a pinot noir whose endless unfurling layers are more than a match for a poem of lists and litanies. Out of five wines and six writers, you’d expect at least one or two to fall a little flat, but guess what—the harmonies are impeccable.

Admit it: you are not imagining this scene taking place in Lamorinda.

But it is. And those wines are garagiste creations made within the American Viticultural Area that encompasses the fraternal-triplet municipalities of Lafayette, Moraga and Orinda. The portmanteau Lamorinda AVA encompasses 30,000 acres, with about 140 acres under vine across 46 vineyards. The typical Lamorinda winegrower is working with a backyard vineyard—the area’s rich in large-but-“unusable” steep-sloped parcels where vines find an agreeable, if complicated, home. Winemaking here is almost entirely micro-scale.

“Micro” is the operative climate descriptor, too—this tiny area has successful plantings of chardonnay and pinot noir, malbec and sangiovese, cabernet franc and petit verdot, sauvignon blanc and zinfandel, among others. Positioned between the coast ranges and Mount Diablo, the AVA combines steep elevations with mixed inland and coastal weather influences that vary widely over shockingly small distances.

Contra Costa County is a land of tensions and counterpoints, physically, socially and culturally. It always has been. County boundaries encompass a human population of 1.2 million. Though it’s somehow perceived as an inland region, it has extensive waterfront on the San Francisco, San Pablo and Suisun bays (the name literally translates to “against the coast”)—but Mount Diablo’s influence is also undeniable. The county’s a weird mix of wealthy bedroom communities and complicated urban centers, farmland and heavy industry—think Kensington and Blackhawk and Orinda, but also Antioch and Richmond; Brentwood cherry orchards and cornfields, but also Walnut Creek shopping malls, Martinez oil refineries and Clayton mercury mines. And certainly, grapes—there are hundred-year-old zinfandel, carignan and mourvedre plantings, artifacts from a prolific winemaking past before Prohibition turned growers’ attention to pears and walnuts. A handful of larger producers still source fruit from these hillsides (Cline Cellars comes to mind, as well as Rosenblum and Viano), but high-priced residential real estate has reduced viable acreage, while Napa and Sonoma counties have risen as the pre-eminent zones for high-end wine. So it’s easy to forget that the present proliferation of micro-producers isn’t exactly a new phenomenon.

Contra Costa winemaking is a bit of a study in the beauties of disadvantage (and already the contradictions start rolling in, because “disadvantage” is a funny word to describe anything about living in, say, Lafayette). Growing grapes in almost pure sand takes some moxie (sand is supremely uninterested in holding onto water), but some 130-year-old carignan and zin vines in Antioch survived the Phylloxera epidemic because the vine-killing lice are deterred by it.

In high-cost-of-living zones where a home vineyard is essentially a lavish hobby, one tends to keep things tiny and homemade and sustainable. And when a vineyard isn’t To-Kalon, or even Cline, and maybe isn’t making money hand over fist, but also has no obligation to systematize or validate the expectations of a large market, it can stay experimental. Contra Costa’s microproducers have no particular reputation to live up to—it’s an unsexy region, considered a provincial backwater by many. Winemaking culture here is not established the way it is in Sonoma or Napa counties; we had it, but it died out during Prohibition.

This unsexiness can be a marketing hurdle, to be sure, but in Lamorinda, people aren’t typically making wine because they are laboring under the illusion that it will net them huge piles of cash. They’re doing it for the same reason poets write poems: They love the craft and have a desire to communicate something about their relationship with their world.

So at the podium in the bank-turned-art-gallery, I’m talking about Thal Vineyards’ sauvignon blanc in terms of its relationship with place, the way the wine is interpreting the site on which it grew, before turning the microphone over to a poet whose work investigates the first-generation immigrant identity and how people hold onto increasingly multiple identities. And it makes a stranger kind of sense than I could have anticipated—the wine’s notes of hay and linden, Meyer lemon and grapefruit, nectarine and aromatic herbs seeming to anticipate the poet’s observations about how languages and cuisines intermingle as families uproot and resettle.

I’m thinking, as we sample Meadow View Winery’s award-winning chardonnay, about the excitement of upended expectations when the nose of a wine sets you up to expect one thing and the palate delivers something totally different (chardonnay does very intriguing things with clay-dominant soils)—and then feeling the same delight as a poet pulls off the same trick, setting up and thwarting one lyric or narrative expectation after another.

The Los Arabis pinot noir becomes a foil for discussing nuance and sensory accord (pinot’s phenolic complexity still baffles me—you can sum up an albarino in a couple of words, but try to get at the heart of a good pinot noir without having to visit a forest, three different orchards, the candy store, a stone quarry and grandma’s kitchen all at once). Raisin d’Etre’s garagiste malbec lights up a discussion of tenacity, of how struggle defines character. And Thal’s cab-merlot blend underpins a “50-50 blend” of poets, husband and wife, who alternate readings that are as seamlessly iron-fist-meets-velvet-glove as the wine’s own duality-duet of tannins and fruit, leather and velour, juiciness and astringency. It’s not just a miracle, but the miracle of the same miracle occurring in totally unrelated media, effortlessly simultaneous. One could be forgiven for feeling as though the universe were … well, patterned.

Contra Costa County is re-embracing its winemaking past in spite of a high cost of living and producing, a “residential” context especially in zones like Lamorinda. Sure, sometimes the neighbors feel the need to pearl-clutch about non-residential activities such as technically having a crushpad where your Tesla is supposed to be. Also, there’s the complex growing situation — fire, seismic instability, slopes too extreme for machines, expanses of mean clay or water-shedding sand, killing frosts, triple-digit heat waves. The ethos and esthetic of these varied small producers runs the gamut, from the unfined, unfiltered, wild-yeast driven to the high-tech; from rustic to elegant; from traditional to innovative to … retro. Virtually any Contra Costa locavore can find something to love in this county’s low-visibility, but extremely well-crafted, wines.

Amy Glynn
is an award-winning essayist and poet; her second poetry collection, Romance Language, is forthcoming from Measure Press in fall 2020.

Previous ArticlePORTRAIT OF THE AUTHOR